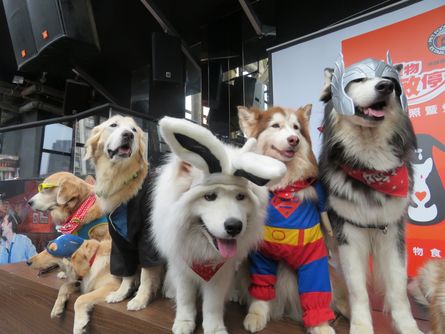 In an effort to promote Kaohsiung as a pet-friendly city, the city council passed a new Animal Protection Bylaw which stipulates that individuals caught for consuming dog and cat meats will face fines up to NT$75,000 (US$2,344), reports said Wednesday.

Those caught pouching dogs and cats will also be liable to fines ranging from NT$50,000 to NT$250,000, according to Hsu Rong-bin, director of the city government’s Animal Protection Department.

Meanwhile, instructors at schools across the greater Kaohsiung area are required to include lessons on animal protection in their social classes beginning the next semester, Hsu said.

“Animal activists will work with school instructors on a periodic basis to educate students on animal rights and protection.”

The new bylaw would forbid owners to operate their pet shop businesses on the third floor (and above) of an apartment building. Operators are also required to clock at least four hours of pet-related courses every three years at government-designated centers. Failure to do so will constitute in the revocation of their business license.

“Animal snares and traps will be banned at pet stores unless a special permit is presented,” he said.

Although the Animal Protection Act has long been implemented to safeguard animal welfare, Hsu said the penalties are often not stiffer enough to punish those abusive or cruel to animals.

“The bylaw would only be effective in Kaohsiung, but we are hoping such rules can be implented nationwide through the local legislation,” Hsu said.

To date, Taiwan has yet to perform a number of animal protection tasks governed by the law, including the improvement on animal welfare and the establishment of animal rights.