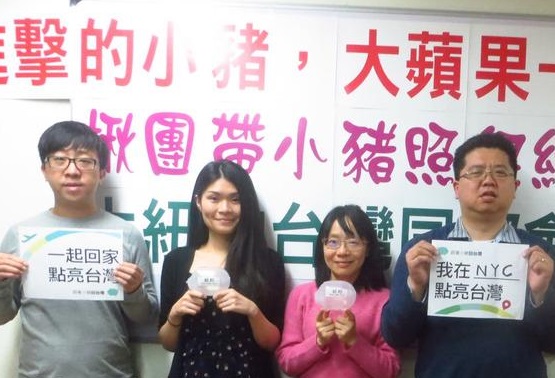 In Taiwan, the piggy banks returned by supporters to campaign headquarters in various cities and counties would be transported by trucks to Tsai’s national headquarters in Taipei, DPP spokesperson Juan Chao-hsiung said.

Supporters in New York will kick off their “Light up Taiwan” rally in the morning across four different locations, including Manhattan’s 42nd and 34th streets, the Bronx, and Queens. The groups will later meet up in Times Square at 7 p.m. to gather their collective donations, where they will be returned to Tsai’s campaign headquarters.

The DPP is a grassroots party that does not have a lot of assets and most of its funds come from small donations. The "piggy bank" idea emerged during Tsai's presidential run in 2011, when three children donated the contents of their piggy banks to her campaign.

That action inspired people from all walks of life around Taiwan to follow suit, the party said.

During Tsai’s previous presidential campaign, a total of 140,000 piggy banks were received, accounting for 87 percent of her funding at that time.