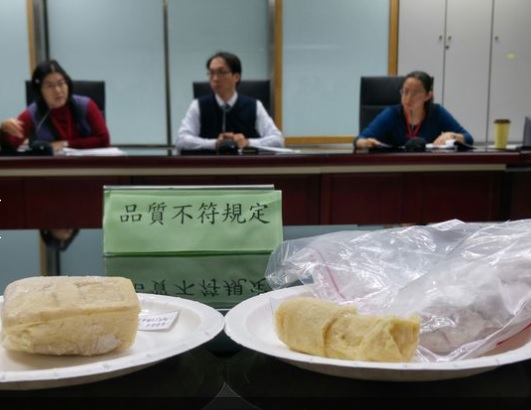 Among the 50 samples inspected, the frozen tofus used by popular hotpot chain Chuanjiliu based in Taipei’s Zhongshan district and the pressed tofus made by a market vendor in downtown Jingmei were found to contain benzoic acid, a preservative agent often used by unscrupulous food manufacturers in Taiwan.

Manufacturers are banned from using benzoic acid or sorbic acid in tofu products, as stipulated in the Standards for Specification, Scope, Application and Limitation of Food Additives.

Since October, health authorities have kicked off inspection tours of the city’s hotpot chain stores, supermarkets and traditional markets in an attempt to safeguard consumers amid the worsening toxic-starch food scare.

Items were randomly collected to be inspected for residues of preservatives, hydrogen peroxide, colorants, borax, and sulfur dioxide.

The frozen tofus used by Chuanjiliu were sourced by a producer based at the No. 542 stall in New Taipei’s Wholesale Fruit and Vegetable Market, according to health authorities.

Meanwhile, the pressed tofus sold by Jingmei’s market vendor were supplied by a distributor in Banciao District, who usually sold their produce in batches.

While benzoic acid can be eliminated from the body via excretion within nine to 15 hours after consumption, excessive intake of the substance can irritate the digestive system, cause stomachaches and affect liver and kidney functions, according to the health bureau.

The suppliers of the tainted tofu products are subject to fines ranging between NT$30,000 and NT$3 million (US$1,000 and US$100,000) in accordance with Article 47 of the Act Governing Food Safety and Sanitation.