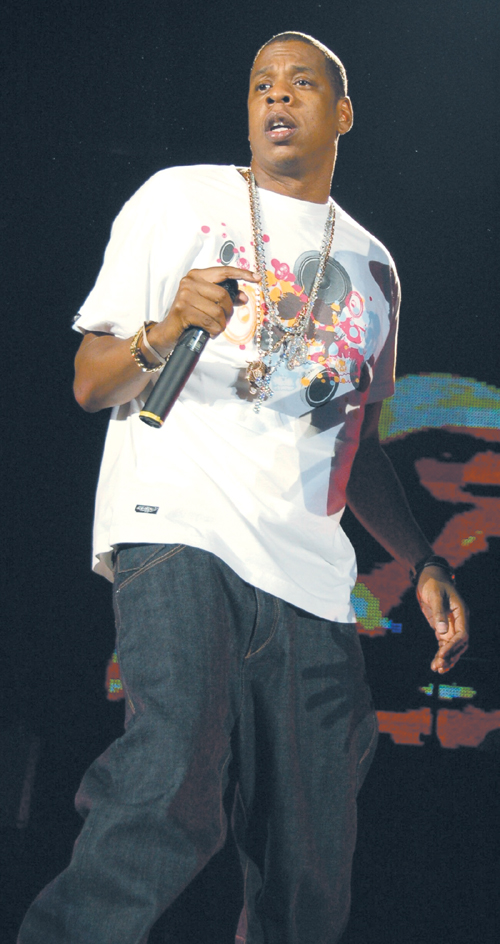 Wealth is all well and good, but it is said that one cannot buy class. And Jay-Z proved the maxim right last Saturday at the Taipei Dome, with a performance as understated as it was well-received. The Jiggaman showed that, the posthumous musings of his dear friend the late Notorious B.I.G. notwithstanding, it certainly is about a lot more than just the Benjies.
Yes, I accused a rapper of a lack of ostentation (how will he ever live it down?), surely not something to which most hip-hop stars aspire. But his focused, intense performance, and minimalist approach to the show's presentation were what made this one of the more satisfying hip-hop concerts of the last couple of years.
Jigga is no shrinking violet, to be sure, and you wouldn't catch a ghetto-fabulous superstar - let alone a rap kingpin - worth his salt greeting fans in the mundane beige number he wore while hob-knobbing with U.N. Secretary General Kofi Annan in August. Sure, clad in t-shirt and baggy jeans, his appearance was far from gaudy, but there was still ample bling in evidence, with a diamond encrusted crucifix the most prominent of the chains around his neck. But, as noted, it was the way in which he went about his night's work and how the "proceedings," as he referred to them, were framed that made the evening quite different from the more padded-out and overblown shows I have witnessed in Taipei.
To start with, the performance was nearly an hour and a half, and that was an hour and a half of music (La Elliot, take note: It was not 35 odd minutes with some dancing and distractions thrown in to push things past the hour mark). Jay-Z brought along his Marcy projects cohort Memphis Bleek (with Jigga's voice showing signs of strain, his Roc-A-Fella protege not only doubled up with him on renditions of some of their work from the "Roc La Familia" album, but also underscored Jay-Z's vocals on most of the other tunes).
The focus was almost entirely on the emcees from start to finish, and it was great to see Jay-Z had chosen not to surround himself with clusters of dancers, props and special effects. I am not against the use of dancers per se, but half the time, the movers and shakers employed in hip-hop these days are cheesy R&B-type gyraters who have little to do with breakdancing, one of the defining 'elements' of the genre.
Jigga broke into accapella freestyles, as DJ Green Lantern's beats faded out at the end of several numbers, which - while perhaps not the best evidence of his skill for spontaneous wordplay - were clearly improvised Meanwhile, fans throughout the stadium (far from full, especially in the upper tiers) made the R.O.C. diamond signs with their hands and held them high as the arabesque refrain from "Big Pimpin'" and the funky loop from "I Just Wanna Love U (Give It 2 Me)" permeated the arena. Most of them were responding enthusiastically, a marked contrast to the mixed reception given to local rap star MC Hotdog who had to deal with cries of "You suck!" (from drunken foreigners who, in all fairness, probably had no idea what he was on about) and a variety of projectiles (locals seemed to be in on the heckling here).
As I suspected he would, Jay-Z showed some professional nous by fulfilling that most basic of duties (a fact that seems to have escaped the attention of too many performers out here) when he gave the crowd an encore. Not long before this curtain call, there was a sudden show of pyrotechnics and the stage was momentarily showered in sparks. This was effective because it was quick, unexpected and a one off. It summed up a night on which Jay-Z demonstrated that somtimes, less can really be more.