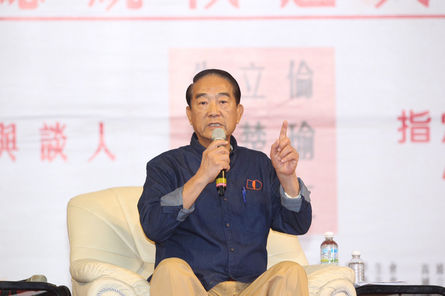 “The only way to break the 22k barrier is by proposing an industrial upgrading and transitioning program to aid domestic traditional industries to become economically sustainable,” Soong said during the televised debate regarding issues on the nation’s youth, education and social welfare.

While Taiwan has always been adept in sectors involving information and communications technologies (ICT), paving the way for green, carbon-free industries will help promote value-added services which in turn could help spur new IT jobs and promising pay increases.

In wrapping up Sunday’s debate with a speech outlining the party’s vision for the nation, Soong promised to deliver hope and a brighter future to the people.

“It is a fact that the young generation has given no hope for the future, because they cannot find work or toil in low-paying jobs. Many of them cannot afford rent amid rising living costs.”

With regard to the stagnant job market, Soong said if he were elected on January 16, he would offer free government-owned spaces for new startup businesses where the nation’s youth could excel at what they do best.

“The government would provide free rents for promising startups for the duration of three to five years,” he said, adding that the young business operator would only need to take care of the rental’s water and electricity bills.

“If I am elected, we will have a better future. I will return the nation to its core values of liberty and democracy. Together we can bring confidence amongst Taiwan’s young populace,” he said.