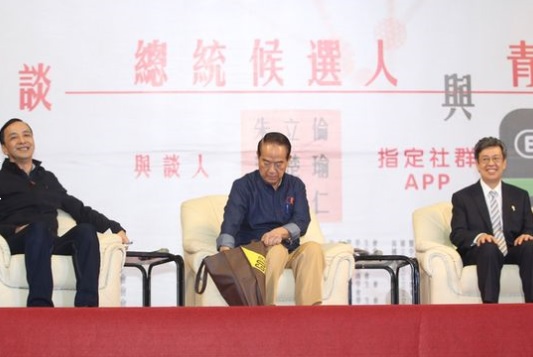 Democratic Progressive Party vice presidential candidate Chen Chien-jen expressed his opposition to the nation’s blinding pursuit of university ranking and his advocacy for qualitative research-based dissertations rather than the emphasis on quantity, reports said Sunday.

“The emphasis is on quality and not quantity, and it definitely shouldn’t be about the commercialization of academic papers,” Chen commented during the televised debate regarding issues on the nation’s youth, education and social welfare.

“We need to focus more on Taiwan-related issues. By doing so, it would help instill interests from foreign institutions, who may come to us to seek for further academic learning,” he said, adding that these researches can also be viewed as great contributions to the local society.

Examples such as the research on indigenous snake species, Blackfoot disease or hepatitis are all valued topics which can be seen as contributions to Taiwan’s academic sector for many generations to come, he said.

“The government has invested more than NT$50 billion in a span of five years on improving educational infrastructure. Its purpose should be served to benefit social wellbeing.”

Commenting on his views about the current state of the job market, including the problems of low wages and unfair taxation, and their solutions to the housing problem, the vice presidential candidate vowed that the DPP will seek to provide the nation’s youth with over 200,000 social housing units at reasonable rents.

“Public spending on social housing in Taiwan currently accounts for less than 1 percent, which is far lower than the average 13 percent among OECD countries,” Chen remarked.

In terms of the saturated job market, the DPP promises to provide additional subsidies for new business startups and to incubate specialized industries – biomedical and innovation technologies – to help spur more employment opportunities.

While Taiwan’s retirement pension program is widely perceived to go bankrupt in future, Chen said the party has drafted a pension reform to relieve the government’s financial burden, improve the pension system and secure income for the retired.

“Our aim is to take reliance, protection, fairness and justice into consideration so that it will not leave debt to future generations,” he said, adding that the proposed reform can be finalized within five years.