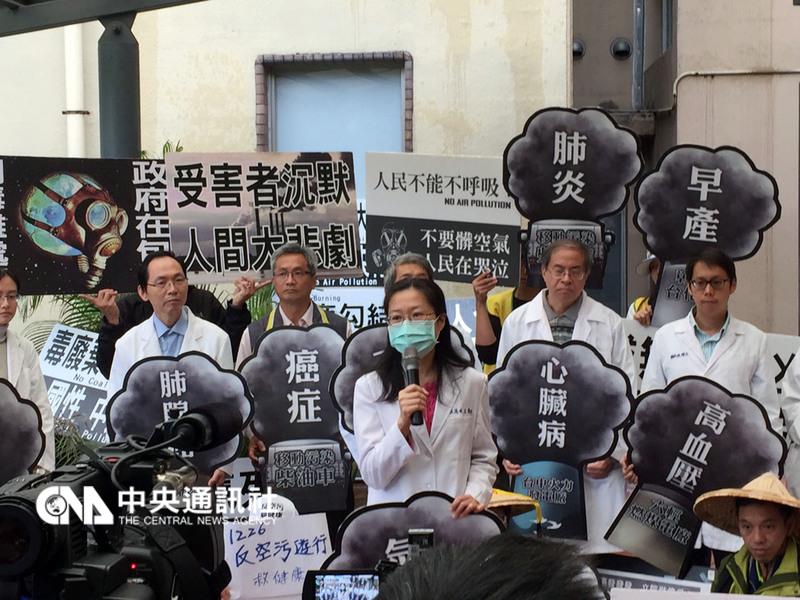 More than 10 pediatricians jointly called for the government and candidates of different political parties for various offices to face up to the serious issues of air pollution in Taiwan in a press conference Sunday.

During the conference, pediatrician Chang Chien Hsiao-yun pointed out that the number of children with allergic asthma in Taiwan has doubled over the past 20 years, which means 1 out of every 5 children has the ailment. Chang Chien blamed PM2.5 for being the main cause of this epidemic.

Air pollution has increasingly become a serious problem in Taiwan, with level of air quality index (API) reaching the very unhealthy level of “purple” in several areas in central and southern Taiwan in the past two months.

Changhua Medical Alliance for Public Affairs and Changhua Environmental Protection Union jointly held this anti air pollution press conference to call for the government and candidates of different parties to come up with political views or solutions to improve air quality in Taiwan.

Attributing the two-fold increase in child allergic asthma cases to air pollution, Chang Chien said, “The environment is a big factor, especially PM2.5, which can reach the pulmonary alveoli at the end of the respiratory tract.”

According to a lung cancer epidemic report compiled after tracing 310,000 people in 17 countries in Europe for 12 years, every 5-microgram increase in PM2.5 will result in an 18-percent increase in lung cancer incidence, said Yeh I-tser, a physician who specializes in pulmonary medicine.

The Tunghsiao Power Plant has cut down its annual sulfur oxide emission from 20,000 tons in 1997 to 7.8 tons in 2010, a 99-percent decrease, after it gradually replaced coal with natural gas, Yeh said, adding that the example is a global trend and should be the solution for Taiwan.

The doctors attending the conference made an advance announcement that there will be an anti air pollution protest on December 26, and urged all people in Taiwan to join the protest to press the government and politicians to improve Taiwan’s air quality.