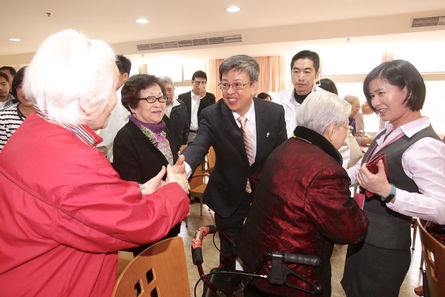 “I look forward for your continued support,” he pleaded, urging voters in Ilan to allow Chen to seek a second term in office so that he could help improve the livelihood of the city’s residents.

The vice presidential contender was all smiles onstage at a rally in Ilan as he campaigned for the party legislator, who had helped establish a number of positive social welfare programs for its senior citizens.

“Taking care of the elderly has always been one of the party’s top priorities,” Chen told supporters in the morning.

Commenting on the issue that the DPP has never won a legislative majority in the past, Chen again called on the people to cast their votes on January 16, as their support will help push the party for a legislative win.

“Let Chen continue to be the voice on behalf of the people in Ilan,” he said, citing that the legislator has always been outspoken against Taiwan’s push for nuclear power, and is a staunch advocate of environmental conservation and protection.

The VP candidate said the DPP vows to make Taiwan a safer place where future generations can be free from the risks of nuclear-related disasters.