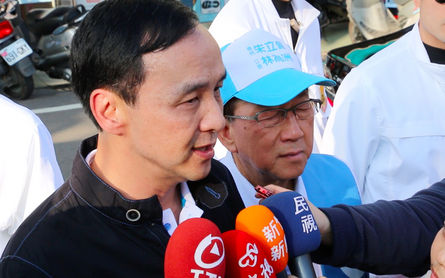 Kuomintang presidential candidate Eric Chu pointed out Sunday that he never once denied Sanlih E-Television (SET TV) from hosting the presidential election debate, however saying it has always been the norm that the priority went to Public Television Service (PTS) in the past.

His comments came during a campaign rally for KMT legislative candidate Wu Yu-sheng in Taipei’s Linkou district in the morning.

The issue on who can host the debate has since become a heated debacle as the KMT and Democratic Progressive Party continue to exchange a war of words, each accusing the other of not being straightforward about their respective favored host media.

“I’m suggesting that we follow the usual pattern as in the past, and that is to go with the alliance,” he said.

The alliance, composed of Public Television Service (PTS), the Central News Agency and four major dailies, said it has staged three rounds of presidential candidate debates since 2004, gaining public trust in its ability to host another round for the 2016 election.

“After 2016, SET or any other television network is welcome to host the presidential candidates debate in future.”

The DPP has since casted doubt over the alliance's fairness and professionalism, accusing it of having been manipulated.

On Saturday, the DPP again criticized the ruling party for requesting to change the broadcaster of an upcoming televised presidential debate, saying the KMT is using delaying tactics to evade public scrutiny.