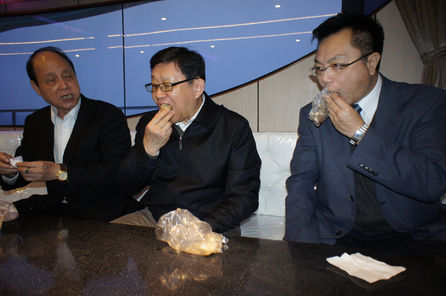 China’s Association for Relations Across the Taiwan Straits (ARATS) Chairman Chen Deming headed to Taichung early in the morning before capping his six-day visit around the island at noon, reports said Sunday.

Chen is expected to make a tour around the central city’s Lei-Shen Museum and a Matsu temple in Dajia District, where he will be paying tribute to the well-known deity, Mazu.

The visit by China’s association head has since sparked huge protests by union activists, politicians and local businesses, who perceived him as a threat to Taiwan’s domestic economy. Chen arrived to the island last week for negotiations on a cross-strait trade in goods agreement.

The government has said that it aims to conclude negotiations on bilateral agreements by the end of this month, with processed agricultural goods rumored to be on a list of products that would be opened to Chinese imports.

On Saturday, Chen told reporters that amid the protests, the correct form of democracy in Taiwan should not be expressed like this.

"Taiwan mainstream democracy should be expressed in a better way," he said, adding that it is not the correct form of expressing personal opinions by staging protests.

Chen had already toured around several cities and counties on the island, where he and other ARATS delegates arrived in Taiwan on November 30 for a weeklong visit.