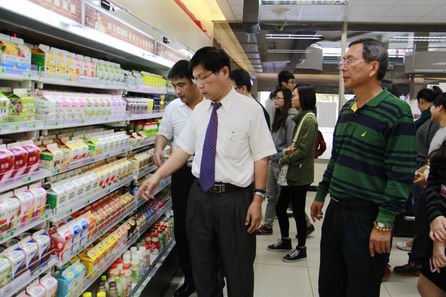 TAIPEI (Taiwan News) – Supporters of better food safety and critics of the recent lenient treatment of Ting Hsin International by the courts will take to the streets of Taipei on December 12, reports said Saturday.
The event is a result of the November 27 not-guilty verdict by the Changhua District Court for former Ting Hsin Chairman Wei Ying-chung, the tycoon at the heart of an adulterated cooking oil scandal uncovered more than a year ago.
Protest organizer Chang Jen-chi reportedly said he wanted at least 10,000 people to gather in Taipei next Saturday to support a call for tougher action against food violators in general. The recent court verdict has given renewed impetus to a consumer boycott of Ting Hsin products which started last year.
The group is mainly involved in the production of food, with major brands such as Master Kong instant noodles and Wei Chuan dairy products, but it also has a 37-percent stake in the owner of Taipei 101 and interests in a range of other businesses, including real estate and telecom.
Chang said he not only wanted politicians to speak out, but also artists and entertainers, doctors, academics and students. The government should know how angry the public is about the violations of food safety and should work hard to force the malafide businesses out of Taiwan, the organizer said.
The march was scheduled to leave Ketagalan Boulevard outside the Taipei Guest House at 2 p.m. on December 12, he said, calling for participants to wear gray clothing. Gray is the color of silence about to explode, Chang reportedly said.
The demands of the protest included changes to current legislation, a requirement for food manufacturers to put money into a food safety fund, a ban on former food safety officials from running food-related businesses and closer cooperation with other countries on relevant issues.
Chang said his movement and protest were politically neutral, so he warned against supporters of political parties and election candidates participating in the march wearing campaign vests or shouting slogans.