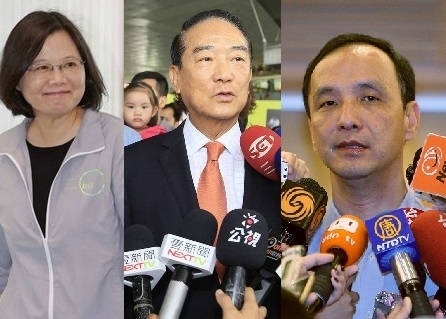 TAIPEI (Taiwan News) – Issues concerning young people will be addressed Sunday at a debate staged by the student associations of seven universities with Kuomintang presidential candidate Eric Liluan Chu, Democratic Progressive Party vice-presidential candidate Chen Chien-jen and People First Party presidential contender James Soong.
The staging of live televised debates has become embroiled in quarreling between the KMT and the DPP, but Sunday’s event would show the first interaction between three major candidates responding to questions from a youth audience.
Since students were both the organizers and the audience, the three candidates would have a unique opportunity to address the concerns of a group of voters which might play a decisive part on January 16, reports said.
Organizers said they were expecting 2,500 young people to attend the debate about issues such as education, employment and housing.
The five main questions for the candidates had already been prepared, reports said Saturday. The first question they would face was whether higher education amounted to an investment in themselves by the students or to a necessary duty by the nation to help citizens realize themselves.
The second question would ask the three men to give their views and concrete policy proposals about the current heavy emphasis by colleges on research over teaching and about the commercialization of research papers.
The candidates would also be asked to give their views about the current state of the job market, including the problems of low wages and unfair taxation, and their solutions to the housing problem. The final question would probe for the candidates’ opinions about the tax system, pensions and social welfare.
The organizers of the event were the student associations of National Taiwan University, National Cheng Chi University, National Tsing Hua University, National Cheng Kung University, Soochow University, National Yang-Ming University and National Central University.