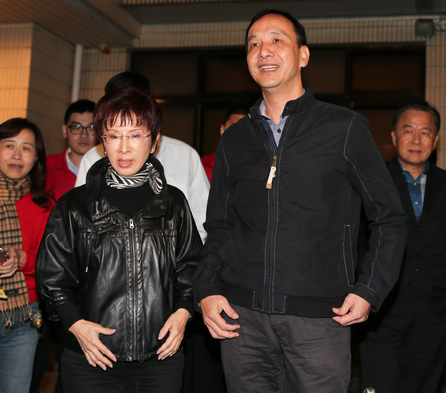 KMT presidential candidate Eric Chu on Thursday paid a visit to Deputy Legislative Speaker Hung Hsiu-chu’s residence for an hour-long closed-door meeting, before they appeared hand-in-hand, awkwardly, in front of the cameras.

It's all about Chu's political calculation. And it turned the whole thing into ridicule.

The Kuomintang revoked the nomination of its presidential candidate, Hung Hsiu-chu, and replaced Hung with Chu at a party congress held on October 17, just three months before the presidential election of January 16, 2016. The reason for the change is the party's worries about Hung's unpopular China policy and her worst poll performance.

She rejected the accusations that she had veered too far from the party’s stance on cross-straits relations, but reiterated her support for a peace accord with China.

In a speech to the congress, Hung warned that the KMT, as a ruling party, should shoulder the responsibility to lead this country in the right direction. "There are some right things that the party should carry on instead of dodging; otherwise it is infringing the integrity, principles, and spirits of the party."

Thousands of protesters marched to the KMT headquarters to voice their discontent against the party’s plan to remove Hung from the candidacy the same day. They emphasized that Hung was the only legal candidate because she had followed all the KMT selection rules and had come out as the winner in the primaries, so it had no right to revoke her candidacy.

After the takeover, the opinion polls show Chu's dwindling popularity. The party now comes under fire after its newly appointed vice presidential candidate Jennifer Wang was accused of reselling at least 19 military apartments for a huge profit.

At the point, Chu knew very well that the KMT won't survive without unity and the party would lose if it was severely divided. And now it’s time to have Hung return to the team to attract some runaway pan-blue supporters infuriated by the revocation back into the fold.


(Sterling Hsiao is a teaching assistant in a business college in Taipei who is a firm believer in method and enjoys reading South Asian diasporic literature.)