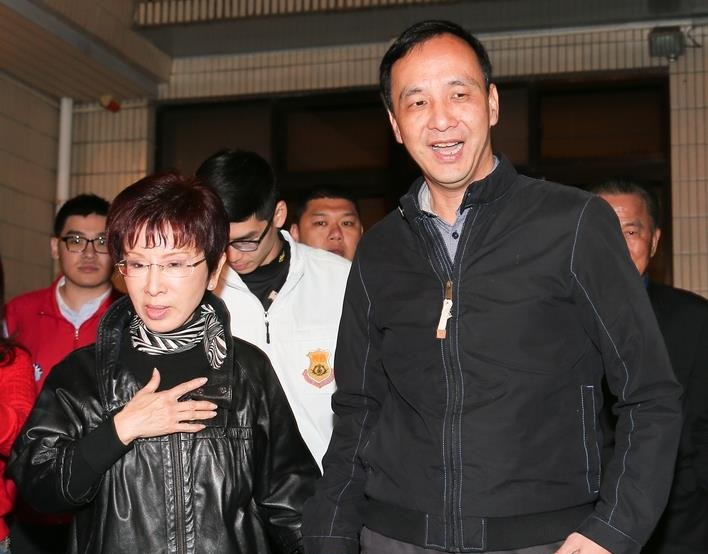 TAIPEI (Taiwan News) – Kuomintang Chairman Eric Liluan Chu visited Hung Hsiu-chu, the woman he replaced as the party’s presidential candidate, Thursday evening in an effort to mend fences, reports said.
A KMT congress withdrew Hung’s nomination in October after she faltered in the opinion polls and nominated Chu instead, with relations between the two growing cold, according to media reports. Hung was reportedly not invited or did not want to attend the official opening of Chu’s presidential campaign headquarters scheduled for Saturday.
Chu visited Hung at her residence of vice speaker of the Legislative Yuan at 7 p.m. Thursday and told her he would appoint her as head of his campaign headquarters’ group of advisers. He also officially invited her to Saturday’s event, reports said. After the meeting, the two appeared outside holding hands, with Hung accepting her appointment, which would be officially announced on Friday, reports said.
At the presentation of a book about her aborted presidential bid earlier in the week, Hung had hinted she was more interested in stumping for legislative candidates than for the KMT’s new presidential contender.
Chu described Hung as an important leading figure in the party whose contribution to the campaign would be appreciated.
Earlier Thursday, it also became known that former Taichung Mayor Jason Hu was likely to be appointed as the head of Chu’s campaign office.
The KMT candidate has been trailing opposition Democratic Progressive Party Chairwoman Tsai Ing-wen by more than 20 percent in most recent opinion polls.