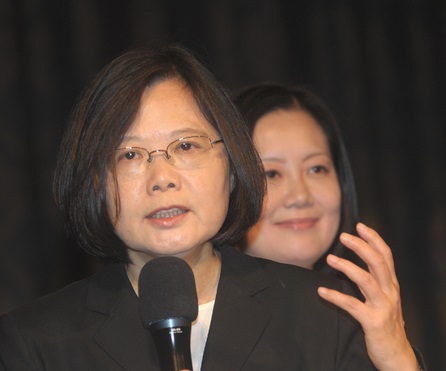 DPP legislator Tuan Yi-kang Wednesday accused Wang of having bought and sold at least 19 military apartments for a profit, using her family members as covers. Wang rebutted his accusation by suing him for aggravated defamation on the same day.

Military-subsidized apartment transactions in less than 5 years after the apartments were owned is against the law in Taiwan, and breaches of the law will result in confiscation of the apartments by the Ministry of National Defense.

Wang has been tight-lipped about how many military apartment transactions she and her husband have made so far. At a campaign stop in Hsinchu County, Wang told the media that she would provide prosecutors and the court with all related information and documents and the facts would come out.

On her campaign trail in the offshore island of Kinmen, DPP’s Tsai said military-subsidized apartments were built to take care of soldiers and their families and should not be used as a tool to make a profit. Tsai said she hoped that Wang would answer all the questions surrounding the controversies. “I’m afraid Wang’s trustworthiness is the real question the issue raised,” Tsai added.