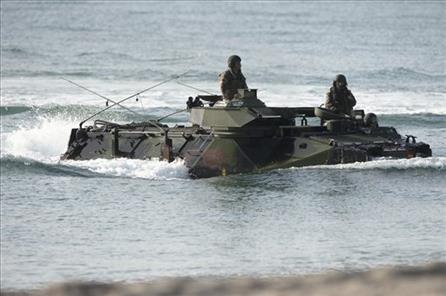 Rumors recently stemmed within the legislature that the 2015-2019 budget request made by the defense ministry for 36 AAV-7s totaling NT$5.3 billion (US$177 million) do not exactly correspond with the sources quoted by Bloomberg View columnist Josh Rogin.

Earlier last month, a report by Rogin revealed that the Obama administration was prepared to fulfill the list of arms procurements requested by Taiwan, which includes: 12 AAV-7 assault amphibious vehicles, one Apache attack helicopter, FIM-92 Stinger, Javelin fire-and-forget anti-tank missiles, TOW, and among several others.

“Why is it that there is a discrepancy between the two?” Kuomintang Legislator Lin Yu-fang questioned during an interpellation at the legislature in the morning.

“How come the report only mentioned 12 AAV-7s while the ministry put down a budget request for 36?”

Kao however responded that Rogin was basing on his own assumptions, and that the details he provided did not come from the United States government.

“We have not received an approval from the U.S. government. Regarding the content of the approved items for sale, the information has yet to be confirmed,” Kao said, adding that the order for AAV-7s is in fact 36, rather than the 12 as speculated by Rogin.

According to the story by the Bloomberg View, members of Congress already gave their approval on the arms sale, citing Democratic Party Senator Ben Cardin and Republican Party Senator John McCain as having written to President Obama last week to press him on the issue.

The United States government is expected to announce its new arms sale package to Taiwan worth US$1 billion (NT$32.5 billion) sometime this month, Rogin said in his report.