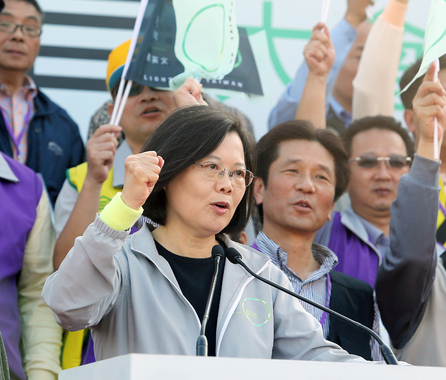 Kuomintang Legislator Alex Tsai slammed the DPP candidate in the morning for deliberately placing blames on her Facebook page, which quoted that pan-Green supporters should instead point their fingers at the ruling judges and the KMT rather than Ting Hsin.

“Tsai is only trying to excuse Ting Hsin for their sins,” he lamented, suggesting that if she intends to scold, then “scold everyone else, including Ting Hsin.”

The KMT legislator also accused Tsai for making false pretenses, and that although she did not mention Ting Hsin in her rhetoric, she has called on the public to boycott their products.

“Tsai has a hidden agenda with Ting Hsin,” he claimed.

Commenting on National Taiwan University’s call on other prominent colleges to join its boycott of Ting Hsin-made products, Tsai urged the nation’s political figures and party members not to get involved in the court ruling, adding that the judiciary system will be the one to make the final judgment.

The Ting Hsin case has since sparked a huge debacle amongst the public, as former company chairman Wei Ying-chung and six other defendants were found not guilty by the Changhua District Court for their alleged role involving tainted cooking oil, and other food products.