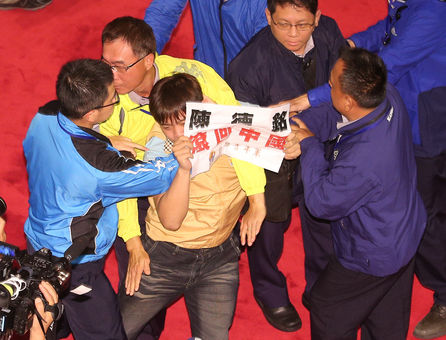 China’s Association for Relations Across the Taiwan Straits (ARATS) Chairman Chen Deming was met with strong protest in Taipei as he arrived for negotiations on a trade in goods agreement with local businesses, reports said Wednesday.

Representatives from the Economic Democracy Union, Taiwan March and other groups gathered outside the China Chamber of Commerce for Import and Export of Machinery and Electronic Products (CCCMBE) in Taipei to protest Beijing’s takeover of the island’s economy.

“Get out of Taiwan!” they shouted. “Go back to China!”

The morning rife garnered over 200 police officers who rushed to the scene to disperse the angry crowd.

Lai urged the people in Taiwan not to fall for President Ma Ying-jeou’s policy on cross-strait trade, which would only make Taiwanese businesses succumb to China’s mercy

Alliance of Referendum for Taiwan Chairman Tsay Ting-kuei also amassed over a dozen people to the protest in the morning, but were barred from the other side of the police barricade away from Lai’s group of protestors.

Tsay slammed political figures and the government for selling out Taiwan, saying the entire negotiation process between both sides has been dealt without transparency.

The alliance chairman also threatened Chen that they will be closely following his tour on the island, claiming that they already prepared baskets of eggs to throw at him.

Chen is expected to visit the National Museum of Marine Science and Technology in Keelung later in the afternoon, reports said.