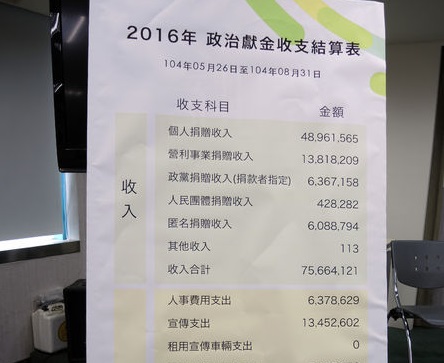 Lin stressed that KMT holds a large amount of party assets, making it an “unfair competition,” and calls for Eric Chu, the Kuomintang presidential candidate, to announce the total and the source of their campaign funds as well.

Lin alongside Tsai’s campaign staff, held a press conference in the morning to announce the amount of Tsai and Chen’s campaign funds from May 26 to November 22, 2015, which adds up the total of NT$453,405,691.

Lin called on voters to participate in the “piggy banks” fund-collecting activities, expressing to the press his expectation for more small dollar contributions in support of Tsai.