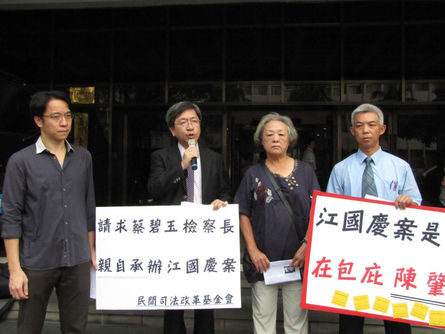 TAIPEI (Taiwan News) – Former Defense Minister Chen Chao-min will not be charged over the wrongful execution of airman Chiang Kuo-ching for the murder of a little girl, prosecutors decided Tuesday after a second review of the case.
In 2011, a military court acquitted Chiang of the crime, but the young man had been executed in 1997 at the age of 21. Critics said that Chen, who headed the air force at the time, was responsible for the mishandling of the investigation which fingered Chiang as the culprit.
The Taipei District Prosecutors Office launched a second review into Chen’s responsibility, but on Tuesday it announced it could find no cause and effect between the senior military officer and the execution. In addition, the case had also passed relevant time limits for the investigation, reports said.
Chiang’s mother, Wang Tsai-lien, has the right to demand a third investigation by prosecutors, reports said.
The family’s attorney accused Chen of being behind a so-called confession by Chiang, which reportedly played a major part in his being sentenced to death.
During the previous investigation, prosecutors concluded that Chen and his team had focused on Chiang after receiving a tip-off by phone, while they also found the airman had failed a lie detector test and had shown injuries which could be related to the attack on the five-year-old girl. Even though Chen used extreme methods to force a confession from the young man, such as threatening him with an electric prod and keeping him under strong lights for long periods, he did not intervene in the judiciary process, and could therefore not be accused of manslaughter or of having directly caused the death penalty, prosecutors said.