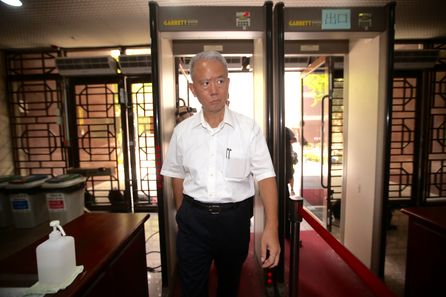 TAIPEI (Taiwan News) – National Taiwan University called on other prominent colleges Tuesday to join its boycott of Ting Hsin International products in a sign of protest against last week’s controversial food safety verdict.
The Changhua District Court last Friday found former Ting Hsin Chairman Wei Ying-chung and several other defendants not guilty of having mixed animal feed-grade oil with cooking oil to be sold to the public for human consumption.
The verdict touched off a wave of indignation, a year after the food safety scandal also gripped the nation.
NTU President Yang Pan-chyr said that he agreed with the views expressed by a student delegation visiting him Monday that the boycott of Ting Hsin products should be expanded to other universities. However, Education Minister Wu Se-hwa and other universities said they would not take any measures to promote similar sanctions.
Since October last year, no products from Ting Hsin had been on sale at the NTU campus, reports said. The student union delegation met with Yang in order to call for a continuation of the boycott and for its intensification by calling on other schools at all levels to stop selling the Ting Hsin food products.
Yang said he agreed with the students’ views, as the Ting Hsin case had turned Taiwan into a “paradise for tainted food” and a laughing stock for the whole world.
The NTU campus, hospital, farm and experimental forest had all stopped selling Ting Hsin foods, a university official said, though if convenience stores still stocked them, students would certainly boycott the goods.
The first reactions from the Ministry of Education and from other universities to the call for a boycott were negative, reports said. Minister Wu said he supported Yang’s action “morally and spiritually,” but that he would use his administrative powers to enforce a boycott by all colleges and schools.
National Tsing Hua University said it was up to the students to decide for themselves what to buy or not, and not up to the school to order a ban from the top down. National Taiwan Normal University said it would not intervene in commercial behavior, but if students decided to launch a boycott, the school would respect their actions.