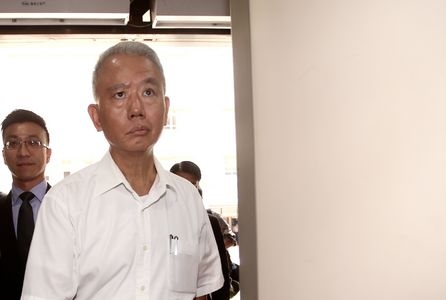 TAIPEI (Taiwan News) – Former Ting Hsin International Chairman Wei Ying-chung and six other defendants were found not guilty by the Changhua District Court Friday of his alleged part in food safety scandals.
The prosecutors had been unable to prove that raw materials for oil imported from Vietnam were not suitable for human consumption, the court ruled, but the prosecutors said they would appeal the case.
About a year ago, the public was outraged as it was discovered that various types of cooking oil had been adulterated with a range of products which should not be served to humans, including waste and industrial products. Ting Hsin, a multinational group led by the four Wei brothers, was accused of being at the core of the scandal.
Prosecutors wanted one of the brothers, Wei Ying-chung, who chaired the main company, to be sentenced to 30 years in prison for allowing his companies to use animal feed oil imported from Vietnam in cooking oil destined for human consumption.
At the most recent court hearing last August, Wei still maintained his innocence, saying he did not know what company employees further down the hierarchy were doing. According to his attorneys, he signed off on the main decisions in Taipei but was not involved in decisions made at the factories around the country on a local level.
The Changhua District Court ruled Friday that the prosecutors were unable to provide evidence that the oil imported from Vietnam could not be consumed by humans. Witnesses had reportedly testified that all pork products were being sufficiently checked in Vietnam and were therefore suitable to be used in food.
In addition to Wei, 58, six others accused of food safety violations were also found not guilty Friday. They were former Ting Hsin Oil and Fat Industrial Co. President Chang Mei-feng, the company’s acting chairman Chen Mao-chia, Vietnamese company Dai Hanh Phuc Co. chairman Yang Chen-yi, Ting Hsin Pingtung factory director Tseng Chi-ming, quality manager Tsai Chun-yung and specialist Chiang Shu-tuan, reports said.
Prosecutors had requested sentences ranging from 25 years in prison for Chang, and 18 years each for Chen and Yang, the man who allegedly imported the unsuitable oil products into Taiwan.
When the scandal broke late last year, the Ting Hsin International Group and its many subsidiaries, including prominent brand Wei Chuan Food Co., were subjected to a massive consumer boycott, while the Wei brothers tried to unload other assets, including a 37-percent stake in the owner of the Taipei 101 building.