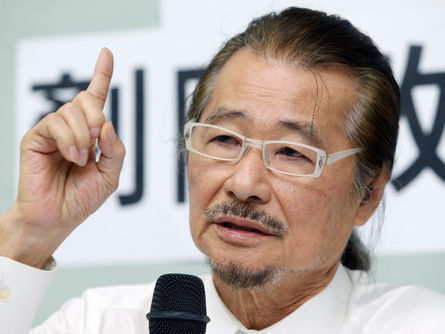 TAIPEI (Taiwan News) – Former Democratic Progressive Party Chairman Shih Ming-te plans to take his failed presidential bid to the Council of Grand Justices for a ruling on its constitutionality, reports said Friday.
Even though Shih announced in September he was giving up his effort, he still showed up at the Central Election Commission Friday to register for the January 16 election.
As predicted, the commission rejected his registration attempt because he could not produce the 300,000 signatures necessary for an independent candidate.
When it became clear last September that he would not be able to collect that many endorsements, Shih announced he would not be running. Earlier in the race, he had reportedly tried to cooperate with People First Party Chairman James Soong, who did not need endorsements because his party won sufficient votes at the previous legislative election. Shih also called on the CEC to allow the registration of online endorsements, but the commission said only filled-out paper forms counted for the election registration.
The rigid stipulations outlined by the presidential Election and Recall Act voted by the Legislative Yuan violated the principles of the Constitution, which guaranteed freedom and equal rights to participate in elections, Shih said.
He said that it was only after an attempt at registration had been rejected by the CEC that a petition to the administrative court was possible. If that court also refuted the petition, he could then take the case to the Council of Grand Justices, Shih said.
He spent 25 years in prison under martial law and went on to lead the DPP from 1994 to 1996. However, he grew disillusioned with the DPP’s first president, Chen Shui-bian, and launched massive protests against him known as the Red Shirt Movement. His attempts to win election as a legislator failed, however.
Shih was reportedly accompanied at the CEC Friday by National Taiwan University economist Kenneth Lin, whom he had filled out as his vice-presidential running mate.