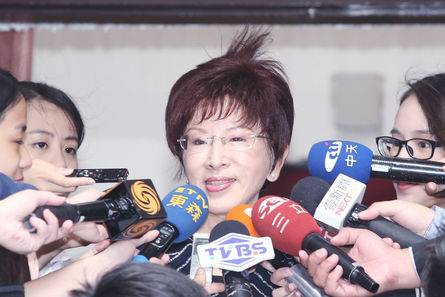 Hung not running for Legislature

TAIPEI (Taiwan News) – Against media predictions, Legislative Vice Speaker Hung Hsiu-chu announced Friday she would not run for a seat at the Legislative Yuan.
She was the presidential candidate of the Kuomintang from the spring until a congress on October 17 replaced her with party chairman Eric Liluan Chu because of her low poll ratings and differences on China policies.
Media reports on Thursday suggested she was planning to run for a seat in the January 16 election in New Taipei City’s Yonghe District, even though the KMT had already nominated incumbent Lin Te-fu for that seat.
Hung told reporters that everything would become clear on Friday, because it was the last day for legislative candidates to register with the election commission.
At 3 p.m. Friday, Hung reportedly told journalists crowding into her legislative office that she had decided not to run as she wanted to encourage the KMT to continue its reforms. As long as that process had not been completed, she said she would not leave the party.
Hung said she had received a phone call from New Party Chairman Yok Mu-ming, but she would not take up any place on the small pro-unification party’s at-large list of candidates.
The vice speaker of the Legislative Yuan was the only KMT politician to run in the party’s primaries earlier this year, virtually guaranteeing she would become its presidential candidate. However, policies advocating closer relations with China and poll results placing her as much as 30 percent behind Democratic Progressive Party candidate Tsai Ing-wen led to the KMT deciding to replace her.
In the aftermath of the change, prosecutors investigated opposition allegations that favors had changed hands to persuade her to withdraw from the race, but no evidence was found and the case was closed earlier this week.