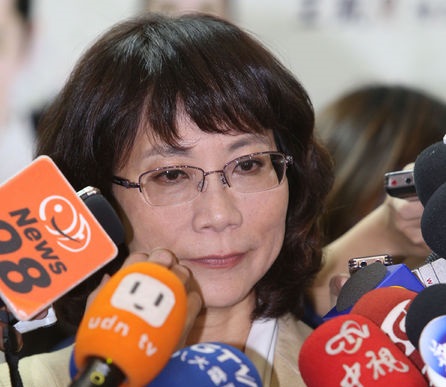 TAIPEI (Taiwan News) – Addressing public outrage over her housing, Kuomintang vice-presidential candidate Jennifer Wang said Friday she would try to move out of her present low-rent dormitory within ten days.
After KMT Chairman Eric Liluan Chu picked her as his running mate last week, allegations surfaced that she bought and sold military real estate for profit and lived with her husband, a Judicial Yuan official, in a cheap government-supplied apartment in Taipei City.
Meeting reporters Friday, Wang told them she would try and move out of the home as soon as possible, most likely within ten days. The couple still owned an apartment in Banqiao, New Taipei City, but it was already rented out, she said, so she was looking for another apartment to rent.
Wang’s housing problems triggered accusations of abuse of power. She was first accused of having just bought one military apartment, but later reports surfaced that three properties were involved. Wang said she had done nothing illegal, while one apartment was destined for her sister.
As to the place where she was living at present, she said that despite the low rent, they had spent significant amounts of money to restore the place.
On Thursday, a farmer came out to deny other reports that Wang had bought land in Miaoli County and then forced him to buy it back at a much higher price. The vice-presidential contender said she had originally bought the plot with an eye to retire, but that was before she became labor minister and could no longer find the time to travel to the countryside.
Chu and Wang registered for the presidential elections Thursday, but recent polls suggested the choice of the former labor and women’s rights activist did not bring the KMT ticket any dividends.