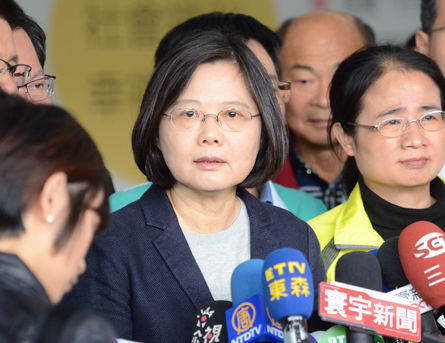 Tsai hopes KMT party members could help persuade Wang to come forth with a positive attitude and explain the whole matter to the nation’s public.

She made the remarks during a campaign rally in Taoyuan in the morning, where thousands of supporters welcomed Tsai’s arrival, cheering “Madame President” amid the frenzy.

Despite callings from her own KMT party to confront the matter, Wang however said earlier that she had purchased only four military residences since the 1990s, but they have since been sold or transferred, denying any shoddy dealings in the .

According to the official documents, Wang owned seven buildings, four pieces of land and NT$28.59 million (US$880,000) in savings, including a Japanese luxury car, jewelry and antiques worth more than NT$2 million (US$61,500) and NT$1 million worth of shares in a car company,

Wang served as the head of the Council of Labor Affairs from 2008 to 2012. Her past policies have since sparked a huge debacle in Taiwan, including the alleged reasoning behind the NT$22,000 minimum wage nationwide.