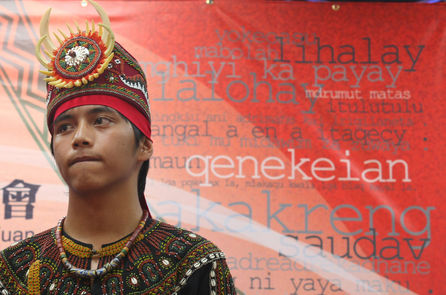 The Executive Yuan passed its draft act on the development of Aboriginal languages and called for its review and swift passage in the legislature to support the Indigenous Peoples Language Development Act, reports said Thursday.

The proposed bill would allow Taiwan’s indigenous languages to be announced through public address systems (PA system) in communities and townships where a large number of aborigines reside, including government district offices, tourist centers, museums, public streets and buses, and as such.

The move is seen as part of the government’s efforts to prevent Formosan languages from disappearing, the Executive Yuan said, citing that among the approximately 26 languages of the Taiwanese aborigines, at least 10 are facing extinction, another nine are moribund, and several others are to some degree endangered.

While mandarin Chinese continues to be the dominant language in Taiwan, the government has since started an aboriginal revitalizing program that includes the reintroduction of Formosan mother tongue education in local schools.

The Act also stipulates that the nation’s public transportation facilities – airports, bus stations – will be required to include some level of Indigenous languages in their PA systems (including signs) besides the usual practice of announcing station names in four languages: Mandarin, Hoklo (commonly known as Taiwanese), Hakka and English.

Regarding what rotation of Indigenous languages to prioritize in terms of announcement, the Executive Yuan said the primary focus will be on the ones that are facing extinction, however adding that other factors will also be considered, including the opinions and views from the local indigenous people.