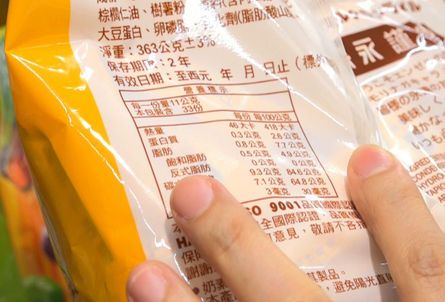 Health authorities in Keelung revealed that a number of food items were found to have failed food labeling regulations, reports said Wednesday.

According to the Keelung City Health Bureau director Wu Zei-cheng, food labeling inspections were carried out randomly between July 1 and November 20 across the city, and 146 items were found to have failed to list the sources of main ingredients on the packaging, including their nutritional values.

“Amongst the 146 items, nine fall under Keelung’s jurisdiction,” Wu said.

Taiwan’s Food and Drug Administration (FDA) rolled out in May a number of new regulations targeting food and drinks in the wake of a widespread pesticide scare, including mandatory testing for pesticide residue.

Products that contain artificial flavoring, preservatives or antioxidants must now be mentioned on the labeling according to their specific usage, Wang Chuei-wen said, section chief at FDA.

For coffees, vendors must use a three-color system to inform customers of the levels of caffeine in the beverages, with red representing more than 201 milligrams per 100 milliliters (mg/100ml), yellow indicating a level of 101 to 200mg/100ml, and green for less than 100mg/100ml, reports said.

The 146 items have since been ordered to be removed from the shelves, authorities said, adding that distributors who commit a repeat offense will be subject to a fine ranging from NT$30,000 to NT$3 million.