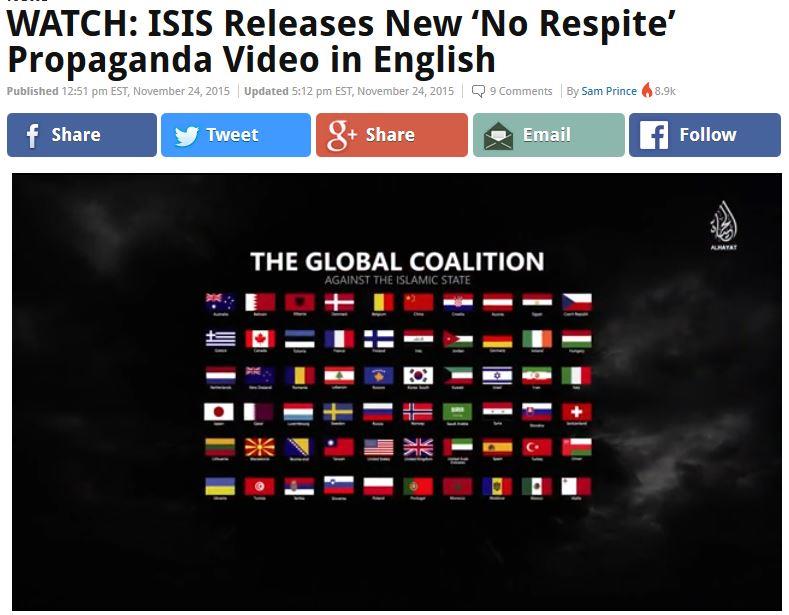 Taipei, Nov. 25 (CNA) The Ministry of Defense (MND) said Wednesday it will continue to monitor global conditions and respond cautiously after a Republic of China flag showed up in a newly released video by the Islamic State, the militant group also known as ISIS or ISIL.

Taiwan is providing humanitarian aid and emergency relief in the U.S.-led anti-terror campaign without getting involved in military operations, MND spokesman Maj. Gen. Luo Shou-he told reporters over public concerns that Taiwan could become a target for ISIS.

In an ISIS video released Tuesday titled "No Respite," Taiwan's national flag is displayed next to the United States flag among more than 80 flags.

The video came after U.S. President Barack Obama said earlier this week that Taiwan is one of the Asia-Pacific countries in a coalition against the Islamic
State of Iraq and the Levant (ISIL) when he attended the Association of Southeast Asian Nations (ASEAN) East Asia summit in the Malaysian capital of Kuala Lumpur. (By Lu Hsin-hui and Jeffrey Wu)