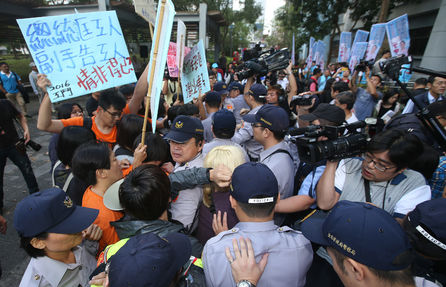 Kuomintang Chairman Eric Chu showed up at the Central Election Commission (CEC) Wednesday with his running mate Jennifer Wang to register his candidacy for the January 16 presidential election.

He was the second set of candidates to sign up after People First Party Chairman James Soong on Tuesday.

Chu’s arrival in the morning was met with massive protests from former freeway toll collectors who have been rallying outside the CEC building since the beginning of this week.

The presidential candidate said during an interview that each day is a blessing, adding that he will stay on schedule with his campaigns despite the challenges ahead, giving a “high five” to reporters amid the loud protests outside.

According to a poll by cable station TVBS released last Friday, Tsai could still rely on the largest group of voters, 46 percent, or 3 percent more than in the broadcaster’s previous similar survey.

Chu received 28 percent and Soong 10 percent, each a rise of only about 1 percent, according to the poll.

On a separate note, Tsai was seen as the favorite by the public to solve the country’s economic problems, with 33 percent of respondents judging she was the most capable, 24 percent picking Chu and 11 percent choosing Soong.