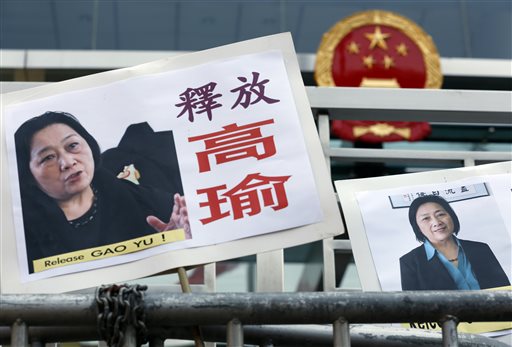 BEIJING (AP) — A Beijing court on Tuesday heard the appeal of a 71-year-old Chinese journalist imprisoned on a conviction of leaking state secrets, but made no immediate ruling, the journalist's lawyer said.

Lawyer Shang Baojun said he could not discuss Tuesday's closed hearing on Gao Yu's case by the city's high court, but he said the court will announce its ruling on Thursday.

Gao was convicted in April of sharing with an overseas news magazine a document detailing the Communist Party leadership's resolve to aggressively target constitutionality, press freedoms and groups that seek to change society but operate outside the party.

The magazine, Mingjing News, has said Gao did not provide the document.

Foreign governments and human rights groups have denounced the verdict again Gao as politically driven and urged authorities to release the elderly journalist, who is in poor health with heart problems.

Shang said Gao's health appeared to be stable at Tuesday's hearing, and that the lawyers would wait for the ruling on the appeal before deciding if they should apply for medical parole.