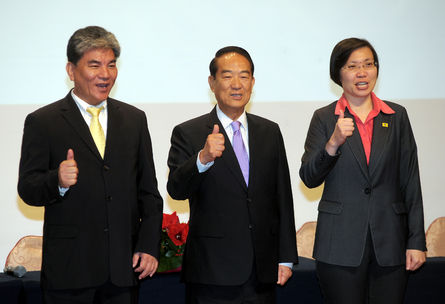 TAIPEI (Taiwan News) – People First Party Chairman James Soong turned up at the Central Election Commission Tuesday with his running mate Minkuotang Chairwoman Hsu Hsin-ying to become the first set of candidates to register for the January 16 presidential election.
While coming close to winning the 2000 presidential election, most recent opinion polls put his present level of support at around or just under 10 percent. He announced the choice of Hsu, a former Kuomintang lawmaker who only founded her party months ago, last week.
Both turned up together with a group of supporters from the two parties in order to register.
The unexpected cooperation between the PFP and the MKT has nevertheless caused friction on the local level, reports said. In some districts, both parties have nominated a candidate for the legislative elections, which are also scheduled for January 16. Talks to try and persuade one or the other candidate to withdraw from the race have not always been successful, reports said.
Kuomintang Chairman Eric Liluan Chu and former labor minister Jennifer Wang will register for the presidential election at 9:15 a.m. Wednesday, while Democratic Progressive Party Chairwoman Tsai Ing-wen and former health minister Chen Chien-jen have chose 10 a.m. Friday, reports said.
The PFP also announced a list of 16 at-large candidates for the Legislative Yuan Tuesday. The list was headed by Lee Hung-chun, an incumbent legislator who recently stepped out of the KMT. A surprise appearance was by well-known gezaixi singer Yeh Ching, but at No.7, she was hardly likely to be voted in, reports said.
Out of 113 members, the Legislative Yuan counts 34 at-large lawmakers elected according to votes cast for political parties. The PFP won three at-large seats at the previous election in 2012.