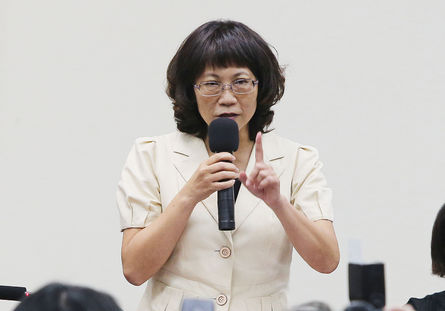 TAIPEI (Taiwan News) – Kuomintang vice-presidential candidate Jennifer Wang on Tuesday rejected allegations that she not only profited from buying and selling military apartments, but that she also lived at a low-rent dwelling for civil servants.
Since being officially selected last week as KMT Chairman Eric Liluan Chu’s running mate for the January 16 election, the former labor minister has faced a barrage of accusations, not only about her record while in office, but also about her forays into real estate.
The latest media report accused her of having to spend only NT$600 (US$18) a month on a property labeled as a “dormitory for civil servants,” but she retorted Tuesday that it cost NT$10,000 (US$306) a month, while she had also spent considerable amounts repairing and restoring the place. Her husband is a department chief at the Judicial Yuan, allowing them to live on government property.
Wang said that she would give a full account of her financial situation at her official registration as a vice-presidential candidate, an event planned for Wednesday.
She had moved into the home for government employees for reasons of convenient transportation and had spent an estimated NT$600,000 to NT$700,000 (US$21,500) on repairs to the ten-year-old property, she said. If you added expenses for water, electricity and security staff, the total cost reached about NT$10,000 a month, according to Wang.
A news release by the KMT presidential campaign headquarters gave the full detailed breakdown of Wang’s expenses, with the total monthly cost reaching NT$10,322.
The candidate said she had not told a single lie about the issue. Earlier, she rejected allegations that she had bought and sold several military apartments in an example of real estate speculation. Wang said she had used her own name to help her sister buy a property completely legally, and transferred ownership to her after her sister had decided she wanted to continue and live there.