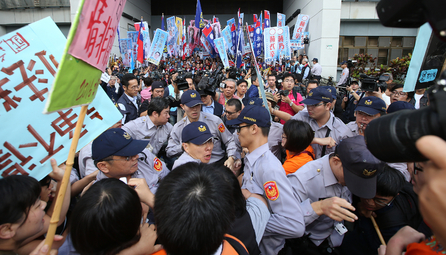 Former Council of Labor Affairs minister Jennifer Wang was met with massive protests from labor activists as she made her way to the Central Election Commission to register her name as Kuomintang presidential candidate Eric Chu’s running mate, reports said Monday.

“Come out and face us!” a female member of the National Alliance for Workers of Closed Factories shouted outside the CEC building, criticizing Wang for not standing up for the nation’s female laborers.

Wang had previously hired a large team of lawyers and budgeted more than NT$25 million to file lawsuits against workers, while making controversial comments, including one about the reasonableness of a NT$22,000 monthly salary.

Amid the chaos, former freeway toll collectors expressed their anger at Wang for shunning the interests of local blue-collar workers, blasting that she is not fit to lead the nation.

The registration opening in the morning also saw the arrival of several KMT legislative candidates, who appeared adamant over Wang’s criticisms in fear of upsetting the party’s “chain of command.”

Wang, who showed up briefly at the building entrance to call for support of other eight legislative candidates who just arrived at the scene, backfired even more resentment from protestors.

“Stop showboating!” they shouted, calling Wang to start looking for a new line of work as she will lose big next January.