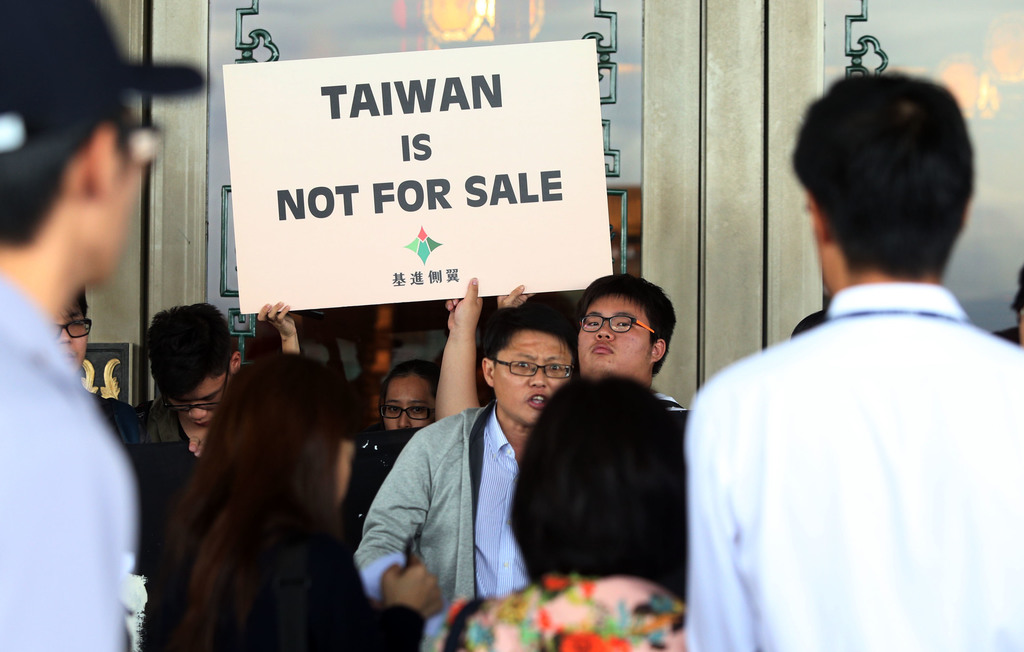 TAIPEI (Taiwan News) – Supporters of the Taiwan Solidarity Union erupted into the Grand Hotel Saturday in a protest against the start of a new round of talks between Taiwan and China about a trade-in-goods pact.
A trade-in-services accord signed in 2013 has still not been ratified as students and activists occupied the Legislative Yuan in protest last year, but the government and China want to wrap up work on a trade-in-goods pact before the end of this year.
As the 12th round of talks started its three-day term at the Grand Hotel Saturday morning, TSU members and supporters showed up outside, holding up placards reading “Taiwan is not for sale” in English and Chinese.
The activists called on the Ministry of Economic Affairs to halt the negotiations immediately because they would harm Taiwan’s economy as well as its sovereignty. Any agreement would only benefit a few, mostly major corporations, while harming the majority of the working population, labor activists said. The TSU said it was not opposed to all trade with China, but the present negotiations were too opaque.
A handful of young TSU members succeeded in entering the hotel, but they were immediately removed.
Taiwan reportedly wants lower Chinese tariffs on panel displays, petrochemical products, machinery and cars, while China wants the island to abolish restrictions on the import of about 1,000 agricultural products. The MOEA has said that in principle, agricultural imports will not be opened up.
Critics have said the government of President Ma Ying-jeou wanted to ram through the trade-in-goods agreement because his Kuomintang was likely to lose the January 16 presidential and legislative elections, with a new government taking office on May 20.