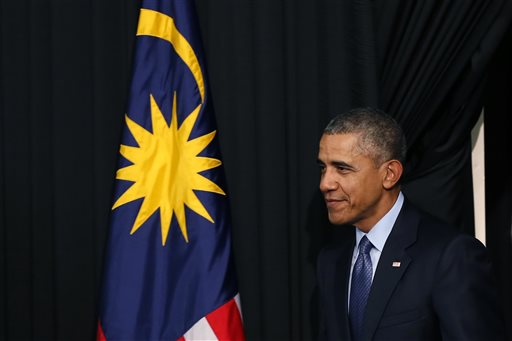 KUALA LUMPUR, Malaysia (AP) — Malaysia's leader on Saturday denounced the Islamic State as an "evil" terrorist group, saying his Muslim-majority country is ready to join others to defeat it while cautioning that a military solution alone was not enough.

What needs to be "vanquished" is the ideology of the Islamic State, said Prime Minister Najib Razak in a speech to open two days of summits that will also include President Barack Obama.

Najib said the world is in dire need of moderation. "This is how Gandhi, Nelson Mandela and Martin Luther King won the hearts and minds of their enemies. They won by transforming their foes into friends," he said.

The summit of the 10-nation Association of Southeast Asian Nations, followed by a series of nine other summits involving Asia-Pacific countries, is taking place in the Malaysian capital in the backdrop of several extremist attacks around the globe, some of which were claimed by the Islamic State group.

The attacks included the bombings and assaults in Paris and Beirut, the bombing of a Russian airliner in Egypt, and the hostage taking in Bamako, Mali, on Friday. Closer to home, a Malaysian hostage was killed by an Islamic militant group in the southern Philippines.

"The perpetrators ... do not represent any race, religion or creed. They are terrorists and should be confronted as such, with the full force of the law," Najib said in a stirring speech that repeatedly emphasized the tolerance of Islam.

"Malaysia stands ready to provide any help and support that we can, and be assured that we stand with you against this new evil that blasphemes against the name of Islam," he said.

Besides Malaysia, the region also includes Indonesia, the world's largest Muslim nation that is no stranger to extremism. But by and large, Southeast Asia has not been inflicted by the kind of violence seen in the Middle East, where the Islamic State is most potent.

Najib suggested that economic growth has been the bedrock of the region's relative peace and progress. The combined GDP of the 10 nations — a motley conglomeration of 630 million people following Islam, Buddhism, Christianity, Hinduism, Sikhism, Confucianism and Taoism — was $2.6 trillion in 2014, an 80 percent increase in seven years.

The region is aiming for greater economic, political and cultural integration. On Sunday, ASEAN — as the grouping is known — will formally establish the ASEAN Community to create a unified economic entity.