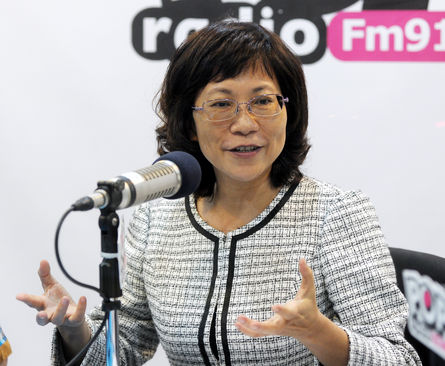 TAIPEI (Taiwan News) – Kuomintang vice-presidential candidate Jennifer Wang came under fire Thursday for allegedly having indulged in speculation using the buying and selling of military homes.
Wang, a former labor minister, was announced the day before as KMT Chairman Eric Liluan Chu’s running mate in the January 16 election. She was immediately criticized by labor groups for her policies while minister from 2008 to 2012.
Wang was accused of speculation over her purchase of a dwelling for members of the military, but she said she was only helping her sister. Because her sister was worried, Wang said she used her own name to buy the property, which was low-priced because it could not be sold again within five years of the purchase. After her sister agreed it was a good buy, Wang said she transferred the property to her sister’s name.
The candidate said everything about the transaction had been legal and above board. A member of the Control Yuan had investigated and found no illegal behavior, she said, adding that such military apartments were available to anybody to buy.
However, Democratic Progressive Party lawmaker Tuan Yi-kang alleged that more than one military dwelling had been involved in Wang’s dealings. The former minister bought an apartment from a Mrs. Wang in 2006, one or two apartments from a Miss Hsieh, and a fourth-floor property from a Mr. Chih, the relative of a military family, Tuan alleged.
The legislator also wondered whether Wang had respected the five-year clause when selling those pieces of real estate again.
As the period for the registration of the candidates approaches, all three major presidential hopefuls presented their choices of running mate over the past few days. DPP Chairwoman Tsai Ing-wen picked Academia Sinica Vice President Chen Chien-jen and People First Party Chairman James Soong chose Republic Party founder Hsu Hsin-ying.