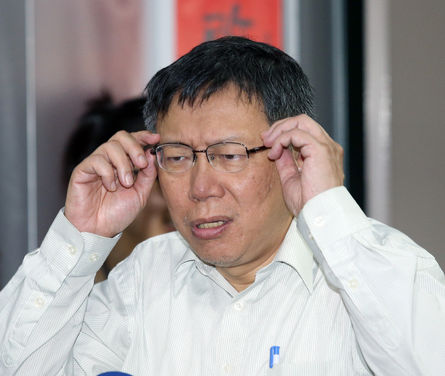 Taipei Mayor Ko Wen-je reiterated that he will not stand by anyone during election campaigns even though he is well acquainted with five of the three groups of candidates, reports said Thursday.

“Rest assured that I will remain unbiased, and will not stand to voice public support for anyone during the campaign period,” Ko said.

Ko’s response came during a food agricultural produce exhibition in Taipei, where he was asked by reporters who he would root for in the January election.

Amongst the six candidates bidding for the presidency and vice presidency, the mayor said the only person he is unfamiliar with is Jennifer Wang, who is currently Kuomintang presidential candidate Eric Chu’s running mate.

“I’m really close with all five of them, how can I stand for anyone without feeling awkward?” he questioned back to reporters, giving his word that he will remain neutral during the election campaigns.

Asked about his views on the alleged plagiarism surrounding Democratic Progressive Party vice presidential candidate Chen Chien-jen, Ko said defamation and slander is hard to avoid prior to the elections, but urged respective party members not to go overboard with their rhetoric.

Chen was accused of academic plagiarism back in 2007, but was later acquitted as no evidence was found to support such claims. On Tuesday, the alleged scandal was again brought to surface by former KMT legislator Chiu Yi a day after Chen was announced by Tsai as her running mate.