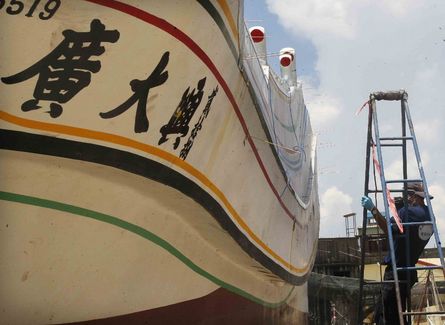 Bilateral negotiations between Taiwan and the Philippines on a fishery agreement in contested areas of the South China Sea have made progress amid rising tensions in the area, Vice Minister of Foreign Affairs Bruce Linghu said Thursday.

The official announcement was released by the Ministry of Foreign Affairs (MOFA) in the afternoon after an agreement between the two island countries has been signed on November 5, Linghu confirmed.

“A consensus has been reached that stipulates both sides should avoid the use of force when disputes occur,” he said.

Taiwan and the Philippines began the negotiations in the wake of a fatal shooting of a Taiwanese fisherman by Philippine Coast Guard personnel in May 2013. The Kuang Ta Hsing No. 28 incident triggered a bilateral crisis which led Taipei to impose sanctions on Manila and demand corrective actions.

The agreement reached contains two mechanisms, one of which is that a one-hour advance notification will be given to the fisheries and coast guard agencies as well as representative office of the other party.

The other mechanism is that if the fishing vessel is found to have violated the law and subsequently detained, it will be released within three days after posting reasonable bond, other security, or payment consistent with the law of the arresting party.

“Most importantly, Taiwan and the Philippines will avoid the use of violence or unnecessary force when enforcing the law,” the vice minister said.

The agreement has been reached amid escalating tensions brought by China’s massive land reclamation efforts in the area, which has prompted the United States to express their concern regarding Beijing’s move to change the status quo in the South China Sea.

To date, the disputes over islands and reefs in the area involve Vietnam, the Philippines, Malaysia, Brunei and China.