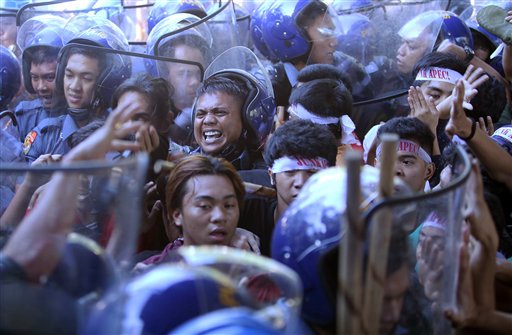 Leaders from 21 countries and self-governing territories are in Manila for the Asia Pacific Economic Cooperation summit. The meeting's official agenda is focused on trade, business and economic issues but terrorism, South China Sea disputes and climate change are also set to be in focus. (All times are local.)

A barricade of police, vans and fire trucks blocks about 1,000 anti-globalization protesters marching on the venue of the Asia Pacific Economic Cooperation leaders' meeting in Manila.

Police are using water cannons and canes to try and disperse the increasingly rowdy protest.

Earlier about 100 students clashed with police at a public square, with the two sides pushing and shoving and police beating protesters with their batons after the students crossed over a security barricade.

The protesters carry banners that read "Junk APEC" and "Down with the Puppet U.S.-Aquino Regime."

Protest leader Renato Reyes of the left-wing alliance Bayan says over the past two decades "APEC and imperialist globalization have only benefited the rich countries while further impoverishing developing countries like the Philippines."

Protesters also marched toward a separate media center for the APEC meetings.

According to presidential spokesman Herminio Coloma, Aquino said: "Welcome, President Xi! Thank you for coming to Manila and attending the APEC meeting." He then gestured for Xi to join the other leaders.

China is at odds with the Philippines and other Southeast Asian nations over China's expansive claims to the South China Sea. The disputes are not part of the APEC agenda.

Meanwhile, Aquino and President Barack Obama have had a meeting and joint press conference and Obama has underlined his support for allies in the region such as the Philippines.

Police have thwarted activists dressed as animals from bringing climate change and animal rights to the attention of APEC leaders.

A "jeepney" vehicle full of PETA activists in full body animal costumes was making its way around Manila's financial district Makati where President Barack Obama, Chinese President Xi Jinping and other leaders were speaking. But it was stopped by police before getting near the venue.

A kangaroo was holding a sign that read "I Am Not Leather" while a pig held a sign in Spanish "Stop Climate Change, Go Vegan." A seal, a rat, a cow, and an elephant were also inside the jeepney, holding placards in various languages and waving to people on the streets.

People for the Ethical Treatment of Animals campaigner Ashley Fruno says "We were shocked that our event was stopped, as all we were doing was advocating for kindness and reminding APEC leaders and delegates that animal agriculture is a leading cause of climate change."

About two hundred protesters trying to march on the venues for APEC meetings are blocked by riot police.

Security is very tight in the Philippines capital as world leaders meet for two days as part of the APEC summit.

Protesters jostled with police and burnt a mock U.S. flag.

Vincent Crisostomo of anti-globalization group Anakbayan says "APEC is an enemy of the Filipino people."

Chinese President Xi Jinping is seeking to reassure regional economic and political leaders that his government will keep the world's No. 2 economy growing.

Xi told a business conference on the sidelines of the APEC summit that China is committed to reforming its economy and raising the living standards of its people.

He also said Beijing is stepping up efforts to counter climate change and clean up its environment.

Xi did not comment on South China Sea disputes.

President Barack Obama is calling on China to halt further land reclamation and new construction in the South China Sea.

Obama is meeting with Philippine President Benigno Aquino III on the sidelines of the APEC summit. He's calling for "bold steps" to lower tensions.

Obama says he and Aquino discussed the impact that China's land reclamation is having on regional stability. He's adding that maritime disputes need to be resolved peacefully.

Aquino says freedom of navigation and overflight in the South China Sea must be continuously ensured, consistent with international law.

Local news reports say a woman in labor failed to reach hospital and delivered her baby on a Manila sidewalk, assisted by police, after getting caught in horrendous traffic due to road closures for APEC.

ABS-CBN news website posted pictures from eyewitness Angel Ramos-Canoy of the woman being helped off a motorcycle and assisted on the sidewalk, apparently in labor. Reports say the incident happened Monday.

Cely Gonzales of the San Juan de Dios Hospital says the woman did not want to be interviewed. Gonzales says "the mother and baby boy are doing well and are about to be discharged."

President Barack Obama tells a business conference on the sidelines of APEC that nations must achieve an "ambitious framework" to limit global warming.

Obama and dozens of other leaders will meet in Paris at the end of the month to finalize a carbon-cutting deal.

Obama urged businesses to view responses to climate change as an opportunity. He says there's no contradiction between economic development and protecting the environment.

"My message to you today is your businesses can do right by your bottom lines and also the planet."

Manila residents are complaining of difficulties getting to work and a fake image of the Philippines being presented to the world during the APEC meetings.

Roads have been closed to regular traffic in central Manila and other efforts made to spruce up the usually traffic clogged city.

Trixie Logan, 19, says it's "a bit off because it's like fake beauty, because they hid the problems around just to say that the Philippines is beautiful."

Many workers whose offices are near the APEC venues are walking for several kilometers to get to work because of the tight security.

Jaime Rocete, 63, says "workers are having a difficult time, especially for those who are sick, with arthritis, it's hard to walk."