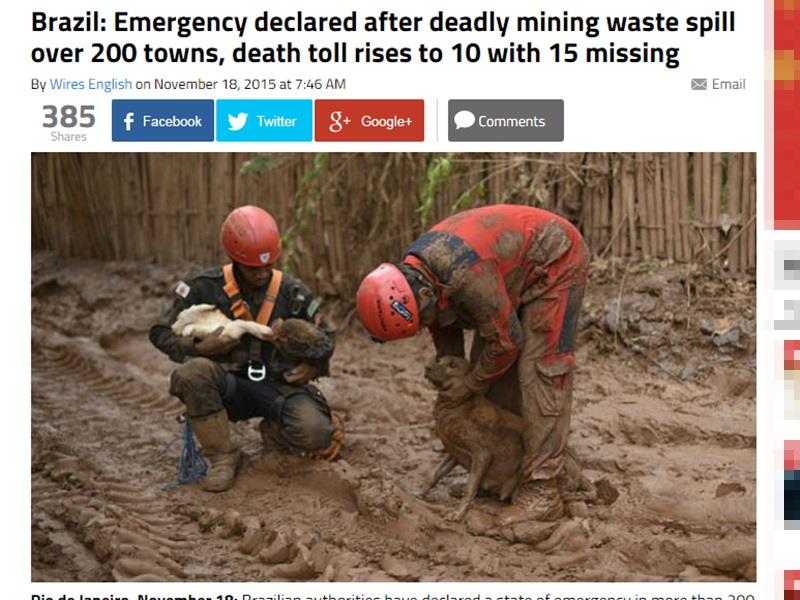 Brazil state declares emergency after mining spill over 200 towns, causing 10 deaths and 15 missing. The mining company Samarco Mineraco SA who caused the fatal dam burst at iron ore mine has agreed to pay $262 million in compensation.

Early in November, a dam burst at the Samarco mining operation in the city of Mariana unleashed a flood of thick red mining waste down into the village of Bento Rodrigues. According to Greenpeace, over 25,000 Olympic swimming pools worth of mud – full of dangerous metals like manganese and mercury – quickly overtook the nearby community of Mariana in Minas Gerais state. At least seventeen people were killed. Hundreds more have been displaced by the wall of sludge released in the dam collapse. The environmental consequences of this mining waste spill are unprecedented. However, the cause of the incident remains unknown.

Samarco, jointly owned by Brazil’s Vale SA and Australia’s BHP Billiton Ltd., signed a “preliminary commitment” to “guarantee funding for a range of emergency measures including prevention, mitigation, remediation and compensation for environmental and social effects of the incident,” BHP said in a statement, reported the International Business Times.

The company is required to pay the first $130 million within 10 days and rest of the sum in a month. A government-appointed independent auditor will supervise Samarco's use of funds, which should "exclusively" focus on costs associated with the incident, the report added, AFP reported.

The toxic mining waste has polluted the environment in Minas Gerais and the neighboring Espirito Santo. The toxic waste will make its way towards the Atlantic coast and eventually jeopardizing the Abrolhos National Marine Park. Currently, thousands of lives are radically affected, which includes fishermen, ranchers, city-dwellers and the Krenak Indigenous people.