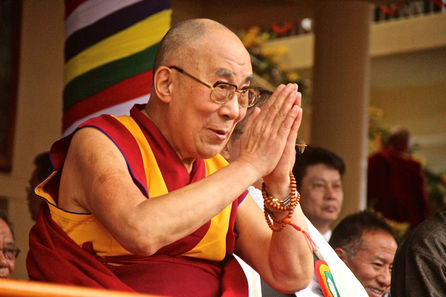 The leader of the exile Tibetan government, His Holiness Dalai Lama told Deutsche Welle that praying cannot stop terrorist attack because only humans can solve this problem created by the human beings.

The Tibetan Buddhist leader told the German media outlet Deutsche Welle that terrorism is created by humans thus it can only be solved by human beings without God’s intervention. "People want to lead peaceful lives. The terrorists are short-sighted, and this is one of the causes of rampant suicide bombings. We cannot solve this problem only through prayers," said the Dalai Lama when asked how he views the attack in Paris.

"I am a Buddhist and I believe in praying. But humans have created this problem, and now we are asking God to solve it," the Dalai Lama went on."It is illogical. God would say, solve it yourself because you created it in the first place."

The Nobel peace prize winner said terrorist attacks come from hatred and short-sightedness. He called on the people to work for peace within the society and their families instead of expecting help from God, Buddha or the governments.

"The problems that we are facing today are the result of superficial differences over religious faiths and nationalities. We are one people," emphasizes the Dalai Lama.