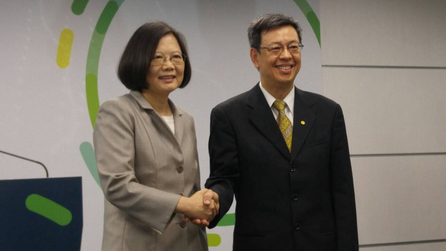 “Chen is the ideal candidate who will help add a new direction to Taiwan’s economic developments,” she said.

Tsai’s announcement came during a press conference at the DPP headquarters in the afternoon, ending months of media speculations as to who would be joining her bid to the presidency.

During the press conference, Tsai told reporters that although Chen has resigned from his vice president position at Academia Sinica, he would not be joining the DPP as party member, but rather as an independent consultant to the party’s think tank.

“With his knowledge and expertise, Chen is an invaluable asset to the country,” Tsai said, assuring voters that they can have complete faith in him for his past contributions to society.

“Chen has showed his leadership during the campaign against SARS and proved to be an effective communicator and coordinator.”

Speaking after the press conference, Su praised the newly formed ticket as "the perfect match."

Born in Kaohsiung, Chen became well-known as health minister from 2003 to 2005, when he tackled the outbreak of Severe Acute Respiratory Syndrome (SARS). After leaving the health ministry in 2005, he went on to serve as head of the National Science Council, another government department.