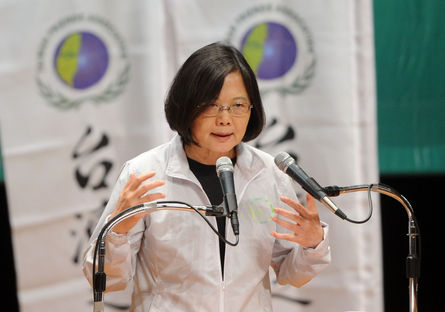 Tsai: Chu is barking up the wrong tree

While the topic on Taiwan’s status quo with China continues to remain a heated debate, Tsai called on her KMT contender to keep his critics at home, and to stop taking the campaign disputes abroad.

“Chu is clearly barking up the wrong tree,” she said, stressing that if he has anything to criticize, he should do so in Taiwan.

Tsai’s comments came during DPP’s campaign efforts in Ilan County in the morning, where she stood on behalf of the party’s legislative candidate Chen Ou-po.

For the past week, Chu has been highly critical of Tsai’s campaign policies, lamenting to U.S. congressman as well as Taiwanese-American supporters that her maintenance of the ‘status quo’ is a farce that remains to be verified.

Tsai rebuked such allegations, saying Chu should concentrate on proposing policies to help drive U.S.-Taiwan relations rather than embarrass himself by taking the domestic battle overseas.

On Saturday, KMT legislator Lu Hsiu-yen, who compared cross-strait relations with that of France and Syria, urged voters – for the sake of peace – to cast their ballot for Chu next year, as failure to do so will result in severe consequences such as the terrorist attacks in Paris.

Speaking on such comments, Tsai however said it’s hard to imagine that anyone with a “sane piece of mind” would want to take advantage of the terrorism in France to manipulate the upcoming elections in Taiwan.

“It’s totally despicable,” Tsai lamented, criticizing Lu and her party members for “stooping so low” beyond the act of mankind.

“We shall not be threatened by the KMT,” Tsai said, calling on the people in Taiwan to share a moment of silence to honor victims of the terrorist attacks in Paris.