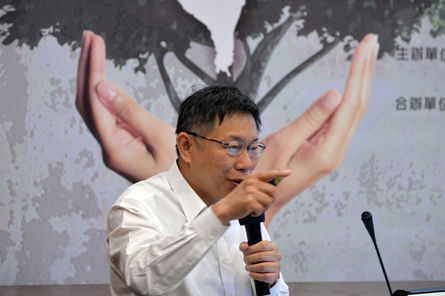 Taipei Mayor Ko Wen-je promised that the government will come up with a concrete plan within the next four years to help improve the city’s air quality, reports said Sunday.

“It’s frustrating that our children today have to be wary of partaking in any outdoor activities due to air pollution,” Ko said.

During an inaugural photography exhibition centered on Changhua County’s Taisi Village, the mayor said his administration will work closely with the central Taiwanese county in a combined effort to curb air pollution.

Residents in Taisi, who have long been affected by poor air quality as a result of the pollutants spewing out of Formosa Petrochemical Corp’s sixth naphtha cracker plant in surrounding Yunlin County, urged the government to exert pressure on the facility to reduce its emissions by asking it to stop burning petroleum coke and coal.

Earlier in April, test results showed that the 380 residents of Changhua County’s Dacheng Township (including Taisi) have higher levels of possibly carcinogenic heavy-metal pollutants in their urine than those of Yunlin County.

“I appreciate the assistance extended by Mayor Ko for staging the exhibition in Taipei,” Hsu Cheng-tang said, an avid photographer based in Changhua, adding that he hopes the event can also be hosted in Kaohsiung, where most of the nation’s heavy industries are located.

On Sunday, Ko also mentioned about the recent deteriorating air quality in Taipei, adding that it has become a trend over the past few years that air quality plummets in autumn.

The government should fix the problem once and for all, he said, stressing that the city administration will carve up concrete plans within the next four years to help combat air pollution.