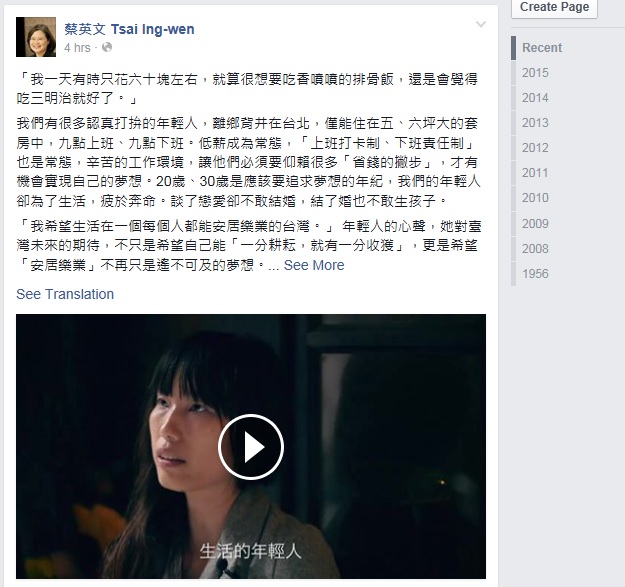 Democratic Progressive Party presidential candidate Tsai Ing-wen promises that her government will set a tone of being supportive of youth welfare if she is elected, reports said Sunday.

Tsai posted a campaign video on her Facebook page in the morning claiming that she will seek to tackle the issue with low pay and income inequality, stressing that a stable career path for the nation’s youth will no longer be unattainable.

The video, which depicts a young female from out of town budgeting on her expenses after moving to Taipei, explains the story of the nation’s grim employment sector where salaries have remained stagnant amid rising costs of living.

Reflecting on the subject, the DPP presidential contender said one of her goals in running for president is to create an efficient government that will help to resolve Taiwan’s working environment, including long working hours and unreasonable pay.

“I hope to find a country where everyone is entitled to live and work in peace and contentment,” Tsai said on social media.

If elected, she would establish an industry-oriented government that addresses the current economic stagnation, low wage levels and job losses that the country is facing, she added.

“I’m confident that our young people today will not bow easily to the harsh environment. Let’s all work together for a better future, and ‘Light up Taiwan’.”