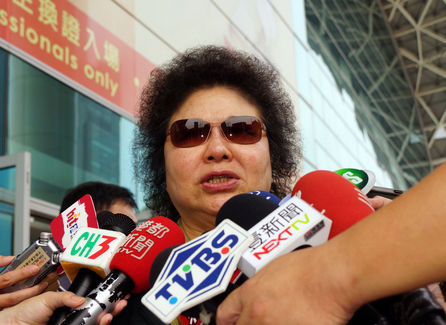 TAIPEI (Taiwan News) – Democratic Progressive Party presidential candidate Tsai Ing-wen’s top campaign official, Kaohsiung City Mayor Chen Chu, on Saturday seemed to confirm media reports that Academia Sinica Vice President Chen Chien-jen would be Tsai’s running mate in the January 16 election.
As the candidates are expected to register officially beginning November 23, the media has raised its attention for potential vice-presidential candidates. The Chinese-language Apple Daily headlined Friday that Chen Chien-jen, a popular former health minister, was Tsai’s choice, but the party leader remained vague in her reactions.
However, on Saturday, Chen Chu was forced into commenting on the matter at a public event in her city.
“The media are really something, it is him,” she was quoted as saying about Chen Chien-jen. She added she was proud to see another resident of Kaohsiung on the election ticket.
Chen Chien-jen gained a high profile thanks to his handling of the Severe Acute Respiratory Syndrome (SARS) crisis in 2003. After leaving the health ministry in 2005, he went on to serve as head of the National Science Council, another government department.
His father, Chen Hsin-an, is reportedly a powerful local factional politician and a former Kaohsiung County magistrate, which led Legislative Speaker Wang Jin-pyng, a member of the same faction, to say that his selection by Tsai might influence the outcome of the election in the southern city.
There were reports that Tsai had also considered other candidates, such as Central Bank Governor Perng Fai-nan and Wong Chi-huey, Chen’s superior at the Academia Sinica, Taiwan’s top academic institution.
Kuomintang chairman and presidential candidate Eric Liluan Chu said during his current visit to the United States that he would announce a choice of running mate next week.
There have also been reports that Chu might be looking for a candidate with a senior medical background.