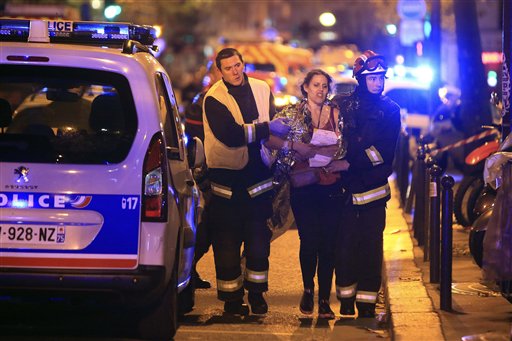 Paris attacks: More than 120 killed at Bataclan and restaurants

NEW YORK (AP) — Management for the Eagles of Death Metal, scheduled to perform Friday night at a Paris venue where at least 100 people were killed, say they are "trying to determine the safety and whereabouts" of the band and its crew.

The American rock band was supposed to perform at the Bataclan, a theater located in eastern Paris near the trendy Oberkampf area. People inside were taken hostage.

It was unclear how many were inside but French police say at least 100 were killed. The death toll is in addition to the 35 people who died in shootings and explosions in multiple sites in the city Friday night.

"We are still currently trying to determine the safety and whereabouts of all our band and crew. Our thoughts are with all of the people involved in this tragic situation," management for Eagles of Death Metal posted on the band's Facebook page late Friday.

The band, formed in 1998 in Palm Desert, California, was celebrating the October release of "Zipper Metal" with an European tour. It's their first album in seven years.

Their website lists about two dozen dates planned for the year, including stops in Munich, Stockholm, Rome and Barcelona.

In an interview in June with The Associated Press, the band spoke excitedly about releasing new music and heading on tour.

"You know, I'm telling you the truth, but this is the coolest job in the world," Hughes said, sitting next to Homme. "Right now I'm sitting in an interview with my best friend in London at Koko's Ballroom talking about myself. It doesn't really get much better than this!"