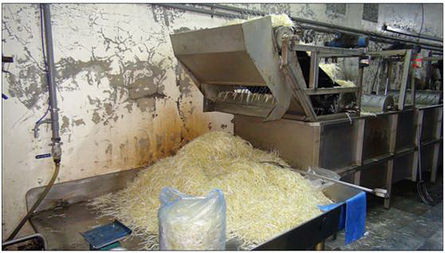 TAIPEI (Taiwan News) – A businesswoman who added industrial bleach to soy shoots received relatively light prison sentences of seven and four months, reports said Friday.
The Supreme Court rejected an appeal against the sentences, originally issued by the Taichung High Court, against Miaoli County food processor Huang Yu-huei and her father.
The verdicts were light reportedly because the court ruled that the practice had not started 30 years ago but was of a more recent date, while Huang’s father committed the alleged violations before current more stringent food safety legislation came into effect.
Huang Yu-hui reportedly used the bleach to make the soy shoots look cleaner and to keep them fresh for a longer time. She produced 480 kilograms of the product per day, delivering them to traditional markets and small restaurants, reports said.
Even though prosecutors alleged the practice had been going on for three decades, the court ruled there was only evidence for a period of six months in 2013 and one-and-a-half month last year. Because the father conducted the allegedly illegal practices before legal changes in 2011, he was not even indicted, reports said.
After succeeding her father at the helm of the business in 1994, Huang regularly mixed 1 kg of industrial bleach with 15 tons of water, which was used to wash the soy shoots, according to prosecutors. Tests by the Miaoli County health authorities turned up the presence of the industrial product.
After receiving a fine of NT$60,000 (US$1,800) in January 2014, she ordered staff to restart the practice again as customers reportedly complained about the look of her soy shoots.
She was sentenced to two separate prison sentences of seven and four months, the latter of which could be replaced by a fine. Her illegal profits totaling NT$110,000 (US$3,300) were confiscated, reports said.