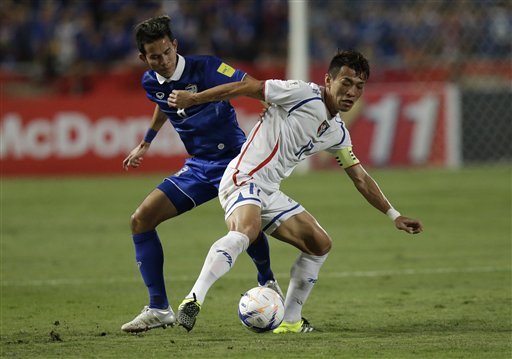 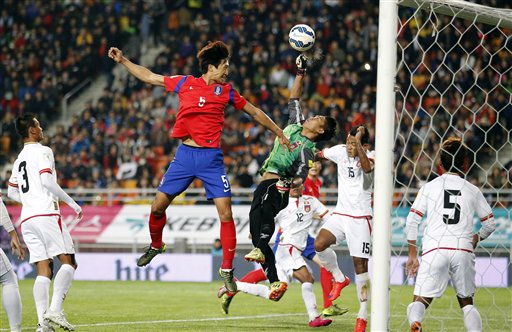 Son Heung-min came off the bench to provide two assists as South Korea beat Myanmar 4-0. Along with Qatar, South Korea is the only team in the second round of qualifying with a perfect five wins from five games.

"We dominated the game and I am pleased with our performance," said South Korea coach Uli Stielike after watching his team's 15th win in 2015. "We expected that Myanmar would be defensive, but we showed what we could do early in the game and made a good start."

European-based Keisuke Honda and Maya Yoshida scored Japan's second and third goals in a 3-0 win in Singapore to put them top of Group E, above Syria.

Australia bounced back from October's loss in Jordan to defeat Kyrgyzstan 3-0 in Canberra, and move within a point of Jordan. Mile Jedinak scored from the spot just before the break, Tim Cahill added a second just after and an Ildar Amirov own goal sealed the win.

"I would have preferred we won 10-0 which we should have. If you look at the number of chances we created, the way we played our football, I was very happy," Australia coach Ange Postecoglou told reporters.

Hong Kong kept its hopes alive with a 1-0 win in the Maldives and hosts China in Group C on November 17. China won 12-0 at home to Bhutan.

Elsewhere, Yemen won 1-0 at the Philippines, North Korea lost 3-1 in Uzbekistan, Afghanistan defeated Cambodia 3-0 and Tajikistan thrashed Bangladesh 5-0. India ended a run of five defeats in qualification with a 1-0 victory at home to Guam.

In Group A, United Arab Emirates put pressure on Saudi Arabia with an 8-0 win over Timor Leste while Malaysian woes continued after losing 6-0 to the Palestinian team.

Only the eight group winners are certain to progress to the final round of qualification. The four best runners-up also advance.